A downloadable game for Windows

Remnants is a top-down exploration game about descending underground into a mysterious abandoned facility.

-Every room in the game is drawn from the ground up, pixel by pixel-

-No combat, no complex puzzles-

-A non-binary protagonist with a sick cloak-

-A carefully composed soundtrack of experimental music (features some guitars by Jack King-Spooner, check him out: https://jackspinoza.itch.io )-

It is also compatible with Mac and Linux by using Wine or EasyRPG.

The game is free since I want everyone to be able to enjoy it. However, I do appreciate donations immensely! If you enjoyed your time with Remnants and can afford it, please consider giving me a dollar or two. Thank you! <3
The soundtrack can be downloaded for free on Bandcamp:
https://june-flower.bandcamp.com/album/remnants-ost

Here I send you a screenshot of the almost finshes stages of the game I am developing, I included the E99% Ergonomy logo, crediting to you. See if you like or not.

I would like to know if i can use it (adding credit to you of course for another projects I am developing, which are going to be free Tapas comics, or illustration I did, related to my game, or the characters of it.

A very lovely experience! I learned so much about environmental storytelling and art in general. Exploring the surreal ruins of a lost civilization further and further down became such a strange adventure but the increasing bizarreness of every screen keeps you going. It's a short game but every moment is packed with feeling.

I really enjoyed this game, the art style was superb and I loved how at times it made me feel uncomfortable. I twas exactly what I was looking for. Thanks for the experience :)

I'm glad! thank you for playing~

Fun game! I always appreciate exploration in any game, and this one is full of it. I especially enjoyed the motif of technology being overrun with plant life - it's my favorite. Well done, all around.

whoa this looks soo good. can't wait to play it : )

I enjoyed this and found the art style inspiring.

I did have a problem where the game would not run because the RPG Maker 2003 RTP was not found. I had to set FullPackageFlag=1 in RPG_RT.ini to fix this.

Thanks, this helped me as well!

Cool experimental game! What was changed in the update 2 days ago?

Nothing of importance, just updating some rpgmaker stuff to work with everyone. wish itch would let me disable the notification to people haha

Easily one of the best games of the year

No combat, not a challenge, only walking and discover, this is so original, I love it! I also really liked all the references. A nice little game, really well done, awesome art style.

Thank you! I'm glad you liked it.

I started to play Labyrinth dereclit ablyss today, I love it too, really awesome games.

I'll just say : I was born to play your game. Thank you. I love it beyond reason <3

sick art and great use of colors, fantastic unique style

Hello, at first, to congratutale for your work. I would like to know which are the terms and conditios of the usage of a graph made by yours in a commercial video game project. In my case, i would like to use the logo of "99%Ergonomy" of the Rec room as a clothes brand in the world I am developing, appearing the logo itself in billboards around the game. Should I do a payment? a credit? a margin of benefits?,

Feel free to use it! The only condition is that you either credit me (either as "additional art" or as "99%Ergonomy logo artist"). Good luck on your game!

Thanks, Ill show you some images when developing!.

Wow! I loved the artstyle, The amount of detail put into the art with only a few colors was amazing, and I really really enjoyed the writing too! has to be one of my favorite games i've played this year!

Thank you so much!! I'm very glad you enjoyed your time with it

I adored the level of detail in this game. Everything about it just oozes care and attention-to-detail. ♥ The ending was... odd. Sort of bittersweet, but something to reflect on. Thank you for making this.

Thank you very much for playing it <3

i got an email saying it was updated, has anything of importance changed or just bug fixes?

Just edited the credits, nothing big. The game won't receive any more content because I'm starting a new project

Played through this tonight in the dark on my back porch and loved it!!  The visuals are so beautiful and striking, and they scratch an itch for me that games simply aren't doing anymore.  Often I long for the glowing pixels of a spectrum or amiga game that bring me so much nostalgia.  Your art is vibrant and just fun to look at.

The sound design was a nice touch.  I particularly liked the menu noises which were kind of like ASMR to me.  Great music too, especially those tracks with the guitar.  Everything fit well.  Also really dig the title screen music.

Gameplay was simple but effective.  Having most useful objects glow was handy when everything is interactive.  Even so, I went out of my way to look at most objects in the game because the descriptions were often funny or interesting.  I never felt stuck which is nice.

The story seemed a little bare-bones but did its job.  I thought the most immersive moments of the game, other than the exploration gameplay, were the moments where you go down a level.  Great cutscenes!  My favorite exciting moment was just entering the first level from the forest.  I felt like an urban explorer.  The elevator scene was neat too.  Only one gripe: at the end I felt like I was having the story about the forest thrown at me all at once at the end rather than observing it earlier, but I enjoyed the journey there nonetheless.

I'm very glad I was able to find this game tonight (via random clicking on Twitter) and play it!  I paid for the "extras" too and was delighted by them.  No spoilers.  I definitely look forward to what you make next.

Thank you so much <3

Im gonna play this because of this review.

reviewed here in abstract, couldn't find a language for it otherwise. https://glitchout.game.blog/2020/05/28/abstract-review-of-remnants-by-june-flower/

Your review has convinced me to give this game a try.

Fantastic! It reminded the craziest parts of Earthbound! It also reminded some of the Soviet Sci-Fi movies from the 70's!

This is a great, short game that really shows the power of how level design can tell a story.  An absolute treat for those of us who love RPGmaker adventure games where everything is intractable.  Great art and great music as well!  Looking forward to seeing more from this creator.

This was a superb and unique experience.
This artstyle is everything I'm looking for in a game, and you have once again proven yourself masterful at neon retro pixel art!

The music is also eerie and mysterious, qualities that I enjoy in game soundtracks.

Can't wait to see more of your work :)

I enjoyed this game quite a bit!  The artwork for all the rooms and setpieces was wonderfully detailed, and the color palette was vibrant and beautiful.  That combined with the fun, weird bits of text and music made for a very surreal, creepy atmosphere.  I also really liked the way the game lets you muse about what strange things could be going on in its world as you explore each room.  Overall it was a great experience, and the art and extra game were nice extra tidbits for the $2 :)  My playthrough is here for the curious:

Wow, il looks like you've put a lot of effort into making these rooms, they are all really unique. Loved the game

Nope, there's only one ending! Not sure what you mean with that last part of the sentence

Haha, I didn't want to spoil the ending so I used ROT13 to encode it. It's an old cypher used online when you couldn't use spoiler tags and such.  You can use rot13.com or the like to encode/decode.

Thank you for the reply!

Reply
Far Away Times2 years ago(+1)

Super-duper-gorgeous. I love the art of course, but also the screen-by-screen static scrolling, the careful map composition, the descent theming. It's just a very nice texture piece, thanks for makin' and sharing it!

I love this game, so much. Its insanely good and probably one of my fav rpgs now. You NEED to play this its ..... . ..  .. .Amazing. plus all the detail is everything i absoulutly love the asthetic of this game.

Exceptionally cool game! It totally nails the sci-fi Dying Earth genre: exploring a long dead space, sifting thru layers of culture, trash, etc, but making meaning out if none of it. The rooms are crazy detailed and exact, no bit ever repeated. The "crafted pixel by pixel" method really suits the gameplay/setting, where you ponder over each intricate bit, taking of it what you can then moving on. The fact that each area is 100% fillied with something, even if it's rubble or layers of paint...this is an area that has been lived in so much it's impossible to understand!

I look forward to your future output. Great stuff!

Thank you so much for your kind words!!

I can tell that a lot of love and effort went into making this! The intricate pixel artwork and sheer variety was wonderful. The game was very atmospheric throughout. I hope that you are justifiably proud of this!

Thank you so much! I am pretty happy with how it turned out. Hopefully I manage to make the next one as good

Do you use a game engine of some sort or is this hand coded?

Okay, that answer was both unexpected and delightful! I loved monkeying around with RPG Maker back in the day.

Really liked this, great atmosphere! Great sound choices and I liked the layer/descent framing a lot.

Thank you!!! I love your work a lot

I really love this game. But it feels weird and surreal atmosphere as well as more than horror game inspired of Space Funeral. Also I played the game and made my video.

There were many visually striking rooms that were a joy to explore. The whole presentation of the game straddled a line between a fever dream and a melancholy, forgotten space. Short and atmospheric. The ending was really good.

Thank you! Some people didn't like the ending because it "didn't explain enough", so I'm glad you liked it

Lovely little thing! Echoes of Annihilation, a little bit of Undertale... And there's a lot of care (and effort) put into the descriptions of, well, everything.

Thank you so much! I'm glad you enjoyed my little game

I love the atmosphere brought out by the pixel art and the music in this. It has a eerie feeling from something like H. R. Giger, but feels original in its own way. Great work!

Thanks! I tried my best to make a good atmosphere, so I'm glad that worked out on your end.

Looks gorgeous. The art style gives me ZX Spectrum vibes. Gonna give this a try when I have some time!

I wanted to say that you could potentially support Linux and Mac too if you wanted using EasyRPG. It's a free open source project, basically a drop-in replacement for the RPG_RT.exe file.

Ah, yes I have heard about EasyRPG. Since I can't test for it I can't really mention it on the page though. Thanks for giving it a try! 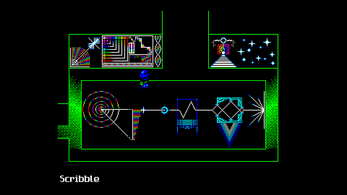 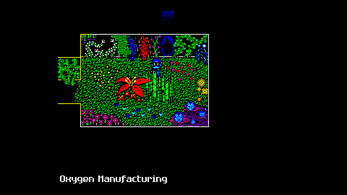 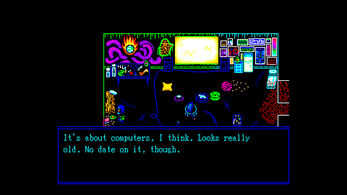 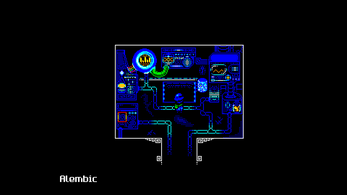 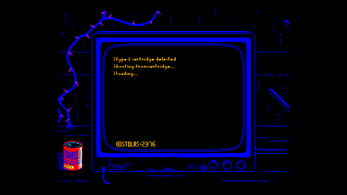